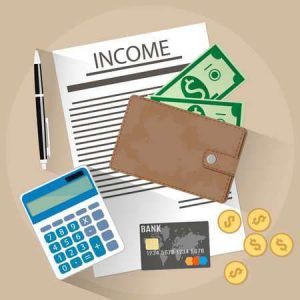 The current issue that voters are clamoring for a solution to involves giant corporations and wealthy individuals not paying their fair share. According to a recent survey conducted by the Pew Research Center, more than half of the surveyed individuals felt very strongly about this exact topic.

What’s worse is that a recent expose published by the Institute on Taxation and Economic Policy showed that 60 United States corporations paid no federal income taxes in 2018. The list of companies involved is impressive: Amazon, Chevron, General Motors, Netflix, and many more.

Understandably, these events have led to a growing movement of individuals demanding legislative changes so that they have to pay up.

There are many reasons for individuals to be upset about these recent developments and discoveries. However, it might be possible that we’ve lost sight of the big picture and could desperately use some perspective.

So what was the tax reform conversation like ten years ago? Can we learn from the past in order to get a better idea on how it relates to the present and how to apply its lessons to the future? Let’s take a look and find out! 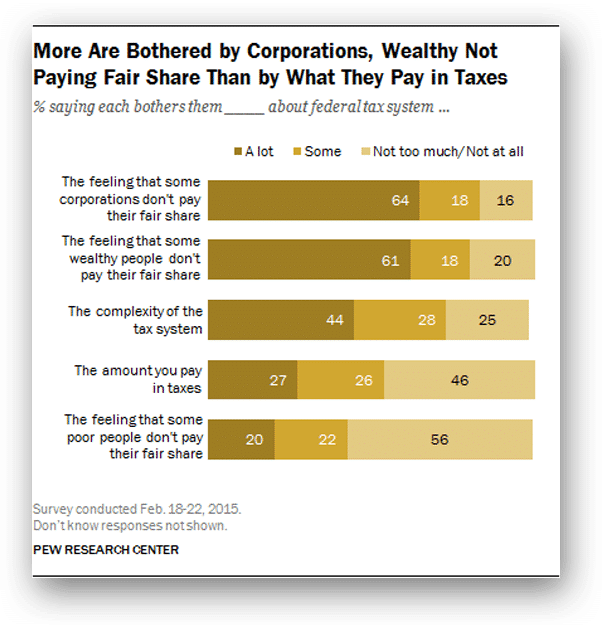 A popular article from 2009 published in the New York Times discussed the widespread use of offshore tax havens by big corporations. The names of the companies implicated in this discussion are just as impressive (if not more so), including titanic organizations like Microsoft, Pfizer, and Goldman-Sachs. Additionally, a 2009 report from the Tax Policy Center showed that 65.6 million people (roughly 43 percent of American citizens at the time) paid no income tax whatsoever.

It seems as though this general sentiment has persisted for quite some time; the only changes have been in the names of companies involved and the increasingly clever methods in which they perpetuate their tax avoidance.

However, there’s some more data from last decade that puts this entire discussion in a new light. Economic think tank The Heritage Foundation analyzed the total amount of federal income tax raised in 2009. Then, they broke down which income brackets paid how much of the final amount based on information provided by the IRS. Here’s what they found: 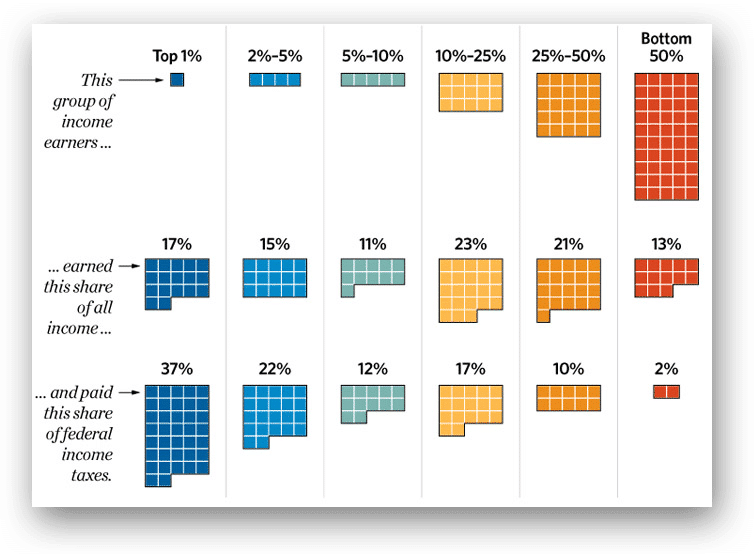 As it turns out, not only are the wealthiest individuals paying the lion’s share of income taxes; they’re even paying more than their own portions of the net income. Look at the top 1%, who paid more than one third of the total amount despite making less than a fifth of the total income. In comparison, the bottom 50% amounted for only 2% of the total while making around one sixth of the cumulative income.

How could any of this be considered “paying your fair share?” Ultimately, the Heritage Foundation’s results revealed that this turn of phrase, and many like it, were little more than worn-out cliches with no real connection to the issues at hand.

Let’s fast forward ten years and come back to the present day. A report from The Tax Foundation has shown that these numbers have moved slightly, but the portions and payments are still very similar: 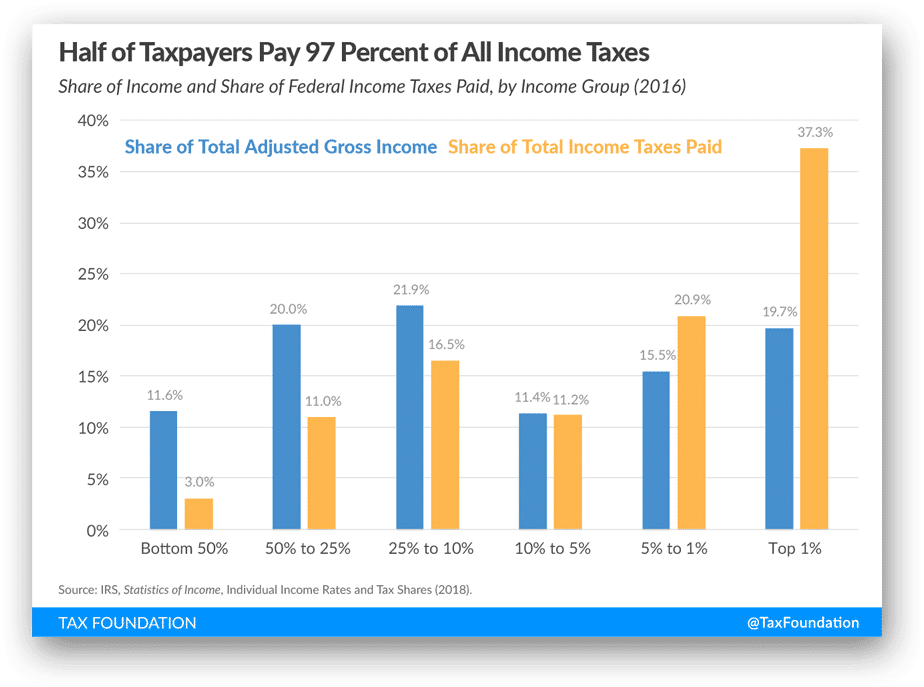 Once again, we can see that the top 1% pays nearly one-third while the bottom 50% pays less than 4%. And when we look at the shares for each bracket, a similar imbalance can be seen as well.

Let’s come back to that first point about corporations not paying taxes on their income. If the wealthiest individuals are paying the most in income taxes, then why aren’t the wealthiest corporations paying theirs? When comparing the hot stories of 2009 to those of 2019, it appears that this practice has simply continued without much changing except for the methods.

But is this really the case? Let’s look at Amazon. The way they managed to avoid paying their bill this year was partially through offshore tax havens: a common practice ten years ago. However, through corporate growth and legislative action, more and more of their tax avoidance has been through awarded subsidies.

Compared to the roughly $6.5 million of subsidies they received in 2009, the $800 billion of awarded subsidies in the first quarter of this year alone dwarfs their previous subsidies by several orders of magnitude. That means more money is being reinvested into the United States instead of squirreled away in other countries.

Federal Income Tax in the Future

So what does this mean?

Should we push for parity between income taxes paid and taxable income made? Is wealthy tax avoidance an overblown issue? In my opinion, the answer to both of these questions is no.

Instead of framing the tax reform conversation around fairness and equality, it might be smarter to focus on a more utilitarian approach. Try asking questions like these:

Looking towards the future, I believe that these and similar questions should be the focal point of our tax reform discussions.