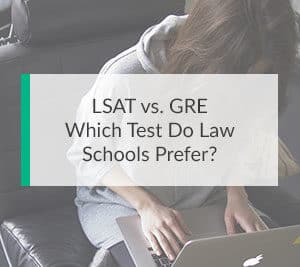 In 2016, the Arizona School of Law made history when they began to allow prospective students to apply using GRE scores in place of the LSAT. After conducting a study into the reliability of GRE scores for predicting law school performance, Arizona found that the GRE was a “valid and reliable” predictor of first-term law school grades. Now, i luga 23 US law schools accept GRE scores.

So the big question is: LSAT vs GRE, which one do law schools prefer?

Should Law Students Take the GRE or the LSAT?

With names like Harvard, Northwestern, and Columbia Universities on this list, the debate over whether prospective law students should take the LSAT vs GRE has heated up. Accessibility, suitability, and expenses are all factors for determining which entrance exam is best for each individual student, but which is the better choice overall?

As mentioned above, one of the key distinctions between the LSAT vs GRE is that the GRE is a computer-based test, whereas the LSAT is administered by way of traditional pen-and-paper. This has a great impact on score turnaround but also appeals to different learning and test-taking styles. Some applicants may find that they are simply more comfortable with a physical exam, feeling more in control of their ability to brainstorm and work through problems. There are many differences between the GRE and LSAT, some stemming directly from this fundamental disparity in formatting.

The GRE is a personalized adaptive exam. This means that a student’s accuracy when answering questions towards the beginning of the exam will determine how difficult later questions will be. i le faapuupuuga, do well and the questions get harder; answer incorrectly and the difficulty will adjust accordingly.

The LSAT, on the other hand, is always a predetermined exam. Each testing session features questions that are set in stone and student performance does not factor into their difficulty.

The LSAT exam is made of six timed sections, five multiple choice sections, and one writing section. Students are given 35 minutes to complete each section and the test is geared toward assessing reasoning and analytical skills.

The GRE has six sections: two verbal reasoning, two quantitative reasoning, and two analytical writing sections. Altogether, the test lasts about 3 hours and 45 minutes. Much like on the LSAT, the GRE verbal sections are meant to test a student’s ability to extract and synthesize information. In the analytical writing sections, students are tasked with evaluating the structure of a presented argument in addition to crafting an argument of their own.

The GRE tests math skills. This particular difference can be seen as either a positive or negative, depending on each student’s history and preferences. Seeing mathematics questions on an entrance exam can be troubling for students with humanities backgrounds, who may not have directly dealt with math in years. This is no secret, Peitai, and many of the top GRE prep courses focus specifically on not only refreshing students’ mathematical knowledge but teaching helpful strategies for tackling these questions efficiently.

The LSAT focuses instead on what the test calls “logic games.” These types of questions are like puzzles, requiring students to set up unique situations and establish their own rules for solving the problems. This tends to be where students get tripped up the most on the LSAT; luckily, the majority of LSAT prep courses tuuina atu i tamaiti motugaafa ma loloto fuafuaga mo tackling nei fesili taaloga.

E tusa ai ma a faʻamatalaga mai le Harvard le Aoga o le Tulafono, many prospective law students are also looking at other types of programs and they take the GRE while considering their various options. The Harvard Law School Dean Martha Minow believes that students, schools, and the field of law in general benefit greatly from a diverse pool of students “in terms of academic background, country of origin, and financial circumstances.” Alleviating the financial burden of applying is a big part of this.

O le LSAT tumau pea le suʻega ulufale autu mo le toatele o aoga tulafono. E ui lava o loo tuputupu ae i le lauiloa ma e mafai e le GRE faaauau pea ona faia faapea, that doesn’t change the fact that the LSAT is the only test currently accepted by ALL law schools. If law school is the only career option you are considering, then taking the LSAT is probably the right choice as it allows for your performance to fully dictate where you apply.

The LSAT exam comes with its own list of positives and negatives, and the right choice will depend on each student’s learning style and career interests. Here’s a quick comparison of some benefits to the LSAT vs GRE certification:

LSAT vs GRE: Which to Choose?

As with all application questions, your individual needs as a student and unique professional goals are the most decisive factors when deciding between the LSAT vs GRE.