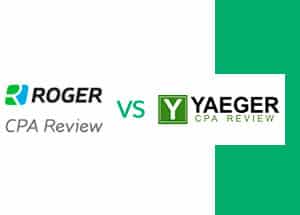 Yaeger ndi UWorld Roger CPA Review have been two of the most popular CPA exam study guides for years, which makes them difficult to decide between. The core components and features of each course are similar, but they are completely different CPA exam prep courses. So how do you decide which one is better?

That’s a good question. Let’s compare the core components and features of each course including the video lectures, kuphunzira malemba, mafunso mayeso mchitidwe, cram courses, and general feel of each to see if one fits your personality and studying/learning style better. I’m sure you’ll have a pretty good idea which CPA study materials are right for you by the end of this comparison.

The best place to start with any study guide comparison is their price. This is what we are all concerned about, isn’t it? Chabwino, as you can see, the Yaeger course is extremely more affordable than the UWorld course. Take a look:

Keep in mind that you can also get some discounts on these courses that I offer to save you some CASH! This type of price difference is pretty incredible. Komabe, it’s going to make a lot more sense once you see the side-by-side comparisons of the two. Let’s start going through the features to see how each course compares to the other.

poyambirira, UWorld Roger CPA Review’s Elite package only offered 24 months of access. Komabe, they’ve recently undergone a significant overhaul of their entire course. Tsopano, their Elite course is now known as Elite-Unlimited and offers unlimited access. Mwatsoka, their Premier course is still limited, and the access period has been shortened to 18 miyezi.

Yaeger’s course materials are also only valid for 18 miyezi. Komabe, if you fail one of your CPA exam sections, they will give you a 3-month extension on that section’s materials for free. This sounds good, but there are a couple catches. choyamba, you have to meet a bunch of study requirements that the staff review in your course analytics. Chachiwiri, you only have 3 months to study for and retake the section again. kotero, if you were planning on taking a different part in the next testing window, you are going to have to double up because your materials are about to expire.

The UWorld Roger test bank, mbali inayi, offers a significantly higher volume of learning material for its higher asking price. With the Elite-Unlimited course, students will gain access to over 6,000 practice questions that have recently been updated to match the most recent changes to the CPA exam itself.

Komanso, both course software packages allow you to generate custom quizzes covering any amount of topics and any length. This is a great feature because it allows you to test yourself on the topics you need help with rather than going through the chapters in a row.

The Roger CPA Review Elite-Unlimited course includes a set of 800+ digital flashcards. There are several pre-made decks that cover important exam concepts, but they also have an Expert deck that’s only available for Elite-Unlimited students.

Both courses come with mobile apps that allow you to take their study materials anywhere without an internet connection. Even if you’re stuck studying somewhere without WiFi (or they won’t give you the password) you can still brush up on important exam topics.

njira izi zikuyamba ndi nkhani Roger amphamvu kanema kenako kuphunzira malemba kuwerenga ndi mchitidwe funso-kuthetsa. With SmartPath, these materials are structured in a way that aims to reduce your study time without hurting your exam score. It’s a unique algorithm based on data gathered from thousands of students; hopefully it’ll work for you too!

Do you like to set your own study schedules? ngati ndi choncho, go with Yaeger. Mbali inayi, UWorld Roger is a great choice if you don’t care about study plans and just want to get started.

Yaeger lectures, mbali inayi, are the complete opposite. Think old-school accounting lecture. They are very informative and full of information, but they super dry and boring. The best thing about Yaeger’s videos is that he goes through practice problems and questions at the end of each lesson. This gives you an idea of his thought process for multiple-choice questions and how you should approach them on the exam. Super helpful!

Although personal preference may play a large role in this decision, we have to give the win to UWorld Roger CPA Review. You’ll have a much easier time paying attention to their video content, whereas Yaeger’s lectures are dry enough to put you to sleep.

Another big differentiator between the courses is their study planners. Yaeger has put a lot of effort into making their smart planner something useful and reliable. After you enter your exam date, it will automatically plot out your study process. If you miss a day, izo isintha yokha tsiku lililonse otsala Maphunzirowa katundu azilipira. Iyi ndi njira kukhala pamzere olondola.

UWorld Roger CPA Review didn’t offer anything like this for a long time. Choncho, they received a lot of criticism from both students and reviewers like me. Zotsatira zake, they’ve undergone some serious changes and implemented some of the smartest adaptive learning software in the business.

Truthfully, either option will provide you with some technology to help guide you through the course. Komabe, UWorld Roger takes the win in this category after their significant overhaul!

UWorld Roger also includes this cram course as part of their Elite-Unlimited package. Komanso, it’s considered one of the best cram courses of its kind thanks in no small part to the unique yet effective teaching style of Roger himself. Truthfully, you’re in good hands regardless of which course you pick!

UWorld Roger has had an issue with this in the past, much like how students criticized their lack of smart learning tools. And as a result, they’ve made some substantial changes to address their students’ needs. Tsopano, enrolled students can read questions posted by Elite-Unlimited students on their Study Hub to resolve common issues.

Monga mukuwonera, both of these study guides are very similar. They both have many of the same features, but UWorld Roger is the better choice.

panokha, I think UWorld Roger CPA Review has made some serious improvements to become one of the best courses on offer right now for CPA candidates. Thanks to the unique learning style contained in its video content and the brilliant predictive tech they’ve implemented, it’s a terrific modern study tool.